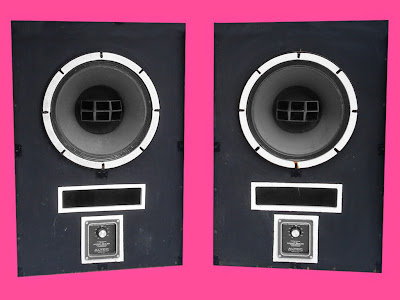 These speakers are giving me more pleasure than I could imagine.
Posted by Lloyd Naftolin at Sunday, May 10, 2015 No comments:

It would have been cooler if I'd written about it when it happened two and a half weeks ago, but it still makes me happy. I was walking downtown, saw a beautiful  poster for the (then) forthcoming second Alabama Shakes album. It was being released in 4 days. When I hit Bloor Street, I went to Kops Records, just to browse (right), and saw a crate full of new copies of Sound & Color. I asked, and they were happy to sell me one.
On my way home, I realized that it's the first new release I've bought on vinyl in about 30 years. I'd hoped that the band was making a new album, but didn't know, before I saw that poster, that it was imminent. There was only 15 minutes between finding out that a band I care about was releasing new music, and having it in my hands. If I'd been paying close attention, like I did 30 years ago, I would've been excited for months. Life is different, but the thrill of opening the shrink wrap and putting on side one of a brand new lp, dropping the needle and hearing brand new music from a band you love never gets tired.
Posted by Lloyd Naftolin at Sunday, May 10, 2015 No comments: